This pint-sized powerhouse was born on the 6th of September 2002 in Montreal, Quebec, Canada. Encouraged by her dad, she took up the sport as a young girl. Thanks to her father’s coaching, she rose to superstardom as a junior by winning the French Open in 2019. Ley’s professional debut came in a little over a month that year. Although she played in her first event way back in 2017, nobody really knew what they were dealing with back then.

As someone who has seen her career go parabolic in under a year, this Canadian debuted in her first Grand Slam (Oz Open) in 2020. That year, she’d also reach her first WTA final and the third round of the French Open. This young woman’s first WTA title came at the Monterrey Open in 2021. Although she exited in round one of 2021’s Australian and French Open tournaments, she pulled a rabbit out of the hat and reached the finals of the US Open before losing to Emma Raducanu. A left-handed player with a two-handed backhand, this youngster is a dark horse. She has been doing incredible things on the circuit, and we expect her to continue doing what she does best.

This young lady’s father watches her like a hawk. He has instilled a sense of discipline in this lady, and she is quite thankful to him for that. Her only focus right now is her game. She would like to achieve all her tennis goals before she goes ahead and finds a boyfriend. We’ve heard that she shuns any man who dares to approach her too.

Who is Leylah Fernandez currently dating?

Courting this woman is going to be very hard. The fellow will have to spend a considerable amount of time with her on the courts too.

That could also be one of the reasons for her solitude. We’re going to play the guessing game and predict that she could become involved with a tennis player sometime soon. However, for now, this Canadian is flying solo.

Her dad is Jorge Fernandez. The man is from Ecuador and used to be a semi-professional football player. He has since become a tennis coach despite never having played the sport. Whilst we don’t know what motivated him, the results are there for everyone to see. Leylah’s mum is Irene Exevea, and she has Filipino roots. This tennis player has a younger sister named Bianca Jolie and an older one named Jodeci. She doesn’t have any kids of her own. We’d be mad to even think that she could have one.

This young woman’s win rate stands at 62.6% as of writing, thanks to the 120-plus matches won in her singles career so far. This left-handed player from Montreal has won over $3 million in prize money alone. We estimate her net worth to be about $4 million, approximately.

How much does Leylah Fernandez earn per year?

Leylah works with Lululemon and Babolat as of now. She also works with Asics, Birchbox, EasyPost, Morgan Stanley, and Telcel/Claro. Flair Airlines, Cambridge Global Payments, USANA, Microsure, Google, and Gatorade are some other brands that have chosen her to represent them. It is estimated that she brings home close to $1 million from them. 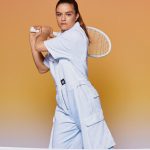 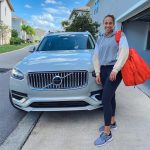