When was the last time Japan produced something as boisterous as Ms Osaka? That’s right. Never. Born on the 16th of October 1997 in Chūō-ku, Osaka, Japan, this young woman began playing tennis after moving to the States as a three-year-old. Training at some of the best facilities in the country, this lady embarked on her professional journey when she was fourteen. By the time she was sixteen, this young woman’s career had truly begun.

The 2014 Stanford Classic was her very first WTA main draw, and it was where she discovered herself. It was also more of a wake-up call to her opponents because this Japanese woman was one of a kind. They began to take notice. This young girl’s first-ever Grand Slam happened to be the Oz Open in 2016. It’d become a place she’d conquer twice (2019 and 2021) in a very short span of time. But everyone knew it was coming because she had just won the US Open, her maiden Grand Slam title in 2018. Naomi won it again in 2020. Things have not been the same since her first major win in 2018. Her career has been somewhat unique in more than one way. She has had numerous setbacks but has always come back stronger. However, this time, the fight’s against herself. This is going to be the hardest one yet, and we sincerely hope she smashes her demons out of the park.

Naomi has had one constant in her life, and that’s her boyfriend, Cordae. Yes, that’s his name, and he happens to be a Grammy-nominated rapper. The two of them met each other at a Clippers game, but he didn’t really know who he was. A flame kindled, and the two started dating each other. They made it official in 2019 and have been together ever since.

Who is Naomi Osaka currently dating?

Cordae’s career has benefited greatly from being with our tennis player. However, that isn’t why he’s with her.

These two like each other, and we heard that they’re very supportive of each other too. Cordae is the man in Naomi’s life for now.

Leonard François and Tamaki Osaka are the parents of our tennis star. Her dad’s from Haiti whilst her mum is Japanese. At the risk of having to repeat ourselves to the point of absurdity, we’re still going to go ahead with the next statement. Leonard is another tennis dad who tried and emulated Richard Dove Williams, Jr. successfully. His work’s here for everyone to see. Naomi has an older sister named Mari, who played the sport too. Our tennis star isn’t married and doesn’t have any kids as of writing.

This lady has seven career titles, and four of them happen to be Grand Slams. She knows how to perform on the biggest of stages. This lady’s career win rate is about 64.6%, and she has made over $21 million from her wins. We estimate her net worth to be about $50 million, at least.

How much does Naomi Osaka earn per year?

Nike, Nissan, Tag Heuer, Louis Vuitton, Citizen, Wowow, Yonex, ANA Airlines, Nissin, BareMinerals, and Shiseido are some of the brands this young woman works with. She’s one of the most marketable athletes on the planet and makes close to $35 million a year from her endorsements alone. Yep, you read that right. 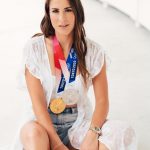