Born on the 29th of April 2003, in Gentofte, Denmark, this professional tennis player began playing the sport when he was just six years old. The only reason he started playing was that he could just copy everything his sister did. However, the young man didn’t know that he’d like it enough to take it up professionally. Encouraged by his mum and coached by Lars Christensen, who has remained with him to this day, our Dane began to impress the people around him with his attitude and willingness to learn. Becoming the Danish U12 champion in 2014 spurred him on to do even better. The young man joined the famous Mouratoglou Academy two years later.

Things got better for the 6’2″ Dane immediately. After some impressive performances as a junior, he debuted as a professional in 2020 when he was just sixteen. Thanks to you know what, his career stalled as soon as it began. It did get back on track immediately, though. The Dane made his ATP debut at the Argentina Open in March 2021. He’d also debut in the US Open, his very first Grand Slam, that year. Reaching the quarters of the French Open in 2022 has been his best Grand Slam performance to date. We’re quite eager to follow his career for numerous reasons. Make sure to stay updated by following us.


People become what they’re exposed to. Let’s put it another way. If you grow up being aware of certain standards, you’ll not want to get down from that place. No matter what. Our player is one such person. If this doesn’t make any sense to you, keep reading, and you’ll find out more about his mum and sister. The two beautiful women in his life have set the bar quite high. He’s yet to find a woman that appeals to his standards.

Who is Holger Rune currently dating?

As of writing, the Dane isn’t dating anyone. We can’t be sure if he’ll ever find a girl who is to his liking. But hey, we’re hopeful that he will.

Anders Nødskov and Aneke Rune are our parent’s players. Although he loves his dad, his mum is his biggest inspiration. She was the one who nudged him to pursue the sport. She even tours with him and can be seen cheering him on when he plays. This Dane has a beautiful sister named Alma. She is a gorgeous being and works as a model. Our player needs to find himself a girl first before he can have any kids.

This player’s win record is barely over 50 per cent. He needs to stop being relaxed about this stat. His singles game has seen him make about $732,880 in prize money. His overall earnings from the sport stand at $1,122,518 as of writing. We estimate his net worth to be just around the $1 million mark.

How much does Holger Rune earn per year?

We know for a fact that this young man works with Nike and Babolat. He’s also partnered with a company called State Energy. His earnings from his sponsors come to $300,000 a year at least. 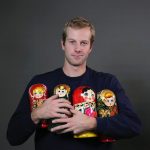