Here’s another left-handed player we’re profiling in our tennis section for you. Born on the twenty-third of August 1995, in Johannesburg, South Africa, this British national spent his youth in New Zealand. It was here he found his love for the sport. As someone who began representing the Kiwis in junior tennis, he switched allegiance to Britain after figuring out that they were going to invest a lot more in him. His gamble did pay off, and in 2017, this young man decided to go pro. He made his Davis Cup debut for the Brits against Spain in 2018 and defeated Roberto Bautista Agut in his opening match. He had made his senior appearance on the ATP tour almost five years earlier. Although he focuses on the singles event, Noz’s very first title was in the doubles event. This youngster’s debut Grand Slam was the French Open in 2018. His best result in the Slams (all four) has been third-round exits. It’s as if he gets a mental block as soon as he reaches Round 3 in a Grand Slam tournament. We hope it’s just that.


Our young man’s girlfriend is Louise Jacobi, a textile designer who attended Central St Martins in London. The couple’s initial meeting is unknown. However, given that he stays in the capital too, it is quite possible that they met in London. The two of them have been spotted on one other’s Instagram profiles since 2019. Louise, a former textiles designer for Calvin Klein, has also worked with New York-based Please Don’t Touch.

Who is Cameron Norrie currently dating?

The Brit is dating Ms Jacobi as of now. The blonde bombshell takes up a lot of work, and it keeps him on his toes.

David, the father, and Helen, the mother, were both born in the United Kingdom and were both squash players at the university level. They worked as microbiologists in Johannesburg, South Africa, where our player was born. He has a sister named Bronwen who lives with his parents in New Zealand. Helen introduced him to tennis whilst he was in Kiwi land, and he’ll forever be grateful to her for that. This young player is not married and doesn’t have any kids.

Noz has been mildly successful as a tennis player. His progress is guaranteed, given that he stays disciplined. This young Brit needs to improve his win record if he wants to get better at the sport and earn more along the way. As of now, his total prize money earned is about $5.3 million. We estimate his net worth to be about $4 million, approximately.

How much does Cameron Norrie earn per year?

This youngster has deals with Rado, Babolat, and K-Swiss. It is estimated that he makes about $250,000 from his sponsors alone. 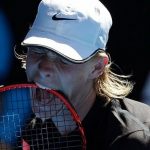 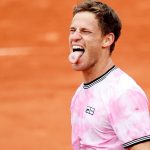