As someone who joined the PGA Tour in 2019, this American already has four wins under his belt. The winner of the Valspar Championship in 2020-21, he has also won it in 2021-22. In addition to this, Burns has already won the Charles Schwab Challenge and the Sanderson Farms Championship in ’22. Born on July 23, 1996, in Shreveport, Louisiana, he went to the Calvary Baptist Academy in his hometown and was an individual state-level golf champion whilst there.

The AJGA Rolex Junior Player of the Year in 2014, this young man pursued higher education at the Louisiana State University. Managing to win four titles in his sophomore year, he decided to go pro and entered the Sanderson Farms Championship in October 2017 as a pro. Although he didn’t join the Tour full-time until 2019, he did make more than one appearance in it. SB was also participating in the Korn Ferry Tour and even won the Savannah Golf Championship in 2018. The winner of the Jack Nicklaus National Player of the Year for the 2016–17 season, this young man is just getting started in his golf career. We wish him the best of luck.

Would you have ever thought that you’d date the girl you met at church as a five-year-old, let alone marry her? Caroline Campbell is that girl, and our golfer only got serious with her after they were done with high school. After dating for five years, our golfer asked her the question in 2019. She said yes, and they married in 2020.

Who is Sam Burns currently dating?

Caroline Campbell is the woman of our golfer’s dreams. He didn’t have to get far from home to find her. He also knows not to ruin something that’s good. That’s why this young man hasn’t strayed in life. Caroline, his wife, is the one he’s dating now. She’s the only one.

Todd and Beth Burns are the parents of our golfer. His dad attended Louisiana Tech and used to be a football player. Sam’s the youngest of their three children. Todd and Beth have a daughter named Tori and another son named Chase. Our golfer’s family is a typical American Christian family. He also has a kid with his wife, Caroline.

This young golfer has already played in over 100 events. With 4 career wins and 22 top-ten finishes, he has made over $14 million from the PGA Tour. Our calculations suggest that this golfer’s net worth could be about $12 million as of writing.

How much does Sam Burns earn per year?

Callaway, Netjets, Adidas, and Mastercard are the brands that endorse this pro golfer. Although he isn’t one of the richest golfers around, he still makes a decent sum to support his lifestyle. Reports indicate that he could be making close to $1 million from his sponsors. 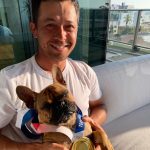 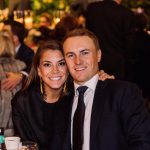