DJ is a professional golfer who currently plays in the LIV Golf Invitational Series. He was born on June 22, 1984, in Columbia, South Carolina, and attended Coastal Carolina University. As an amateur golfer, he won the Monroe Invitational and the Northeast Amateur in 2007 before deciding to become a pro player. Winning his 2008 PGA Tour card late that year, this player won his first Tour event, the Turning Stone Resort Championship, in October 2008. As he continued to grow, his performances began speaking for themselves.

Finishing T2 at the 2011 Open Championship in England gave him the confidence he needed to compete against some of the best in the business. 2016 turned out to be his breakaway season. The winner of the US Open that year also won numerous individual awards for his stellar performances on tour. With a total of 24 PGA wins and 9 European Tour wins, this golfer knew that he had achieved enough here. That’s why he announced that he was going to become a part of the LIV Golf family in May 2022. Although he has been sidelined from the PGA Tour, he knows that he needs something new in his life. After all, monotony is a killer, isn’t it?

This young man first laid his eyes on Paulina in 2009. However, he didn’t ask her out back then. The couple started dating each other circa 2013 and decided that they were meant for each other. They did get engaged in a hurry, but the couple waited until 2022 to exchange vows.

Who is Dustin Johnson currently dating?

Paulina is a singer, an actress, and even a model. She was quite eager to become a wife and a mum, which is why she said yes to our man after dating him for just 7 months. Little did she know that golfers take their time. Thankfully, Paulina is married to DJ now. She’s the one this golfer is currently dating.

Kandee and Scott Johnson are the parents of our golfer. This couple instilled a winning habit in DJ at a very young age. Although his folks separated in the late 90s, he’s still spoken fondly of them in numerous interviews. This golfer cherished every moment he spent with them. DJ isn’t an only child. He has a brother named Austin, who also plays golf. Austin also serves as DJ’s caddie. His sister is called Laurie. This golfer has two sons with his wife. Their firstborn came into this world in 2015, whilst their second was born in 2017. They’re both boys and named Tatum and River Jones, respectively.

The third highest earning golfer of all time, only behind Tiger Woods and Phil Mickelson, this man has raked in about $85 million from playing on the PGA Tour. His deal with LIV Golf will see him make about $125 million or so. Combined with all this, we estimate his net worth to be about $100 million as of writing.

How much does Dustin Johnson earn per year?

Although he lost the Royal Bank of Canada as his sponsor after signing with LIV, the young man still enjoys deals with Adidas, Hublot, BodyArmor, Perfect Practice, and TaylorMade. It has been reported that his earnings come around to about $20 million from them. 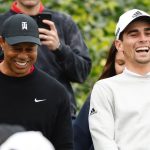 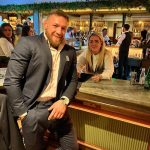