From Barrika, Spain, this golfer has made the USA his home now. Born on November 10, 1994, he played football and other sports before deciding to focus on golf. This was probably one of the best decisions he had ever made. Attending Arizona State University on a golf scholarship, he went on to win 11 college-level tournaments before deciding to do this sport professionally. The winner of the Ben Hogan Award and the Mark H. McCormack Medal in 2015, this young man turned pro in 2016 and won the Farmers Insurance Open in the 2016-17 season.

The winner of the Sir Henry Cotton Rookie of the Year award in 2017, this Spaniard has cultivated a habit of winning at least one tournament every year. The European Tour Golfer of the Year in 2019 and 2021, this player has a total of seven wins on the PGA Tour, seven on the European Tour and one additional win for a total of fifteen. A former World number one, Rahmbo, will be eager to attain to get back on the throne soon. In fact, this multiple award winner will be vying to write his name in the annals of golfing greatness.

Rahmbo always knew that attending Arizona State University would improve his golfing career. However, he didn’t know at the time that it would sweeten his life too. Kelley Cahill, a track and field athlete who excelled in the javelin event, caught his eye. The two began dating soon after. They graduated and moved in together before tying the knot in 2019.

Who is Jon Rahm currently dating?

Rahmbo and Kelley once played a tennis match against each other. This was back in college. He got himself a thumping victory, and the woman stayed too. This Spaniard is one lucky bloke, and he’s glad to have a woman who is such a good sport by his side. She’s the one he’s dating now.

This Spaniard is from the Basque region of the country. Edorta Rahm and Ángela Rodríguez are the parents of this player. It is, in fact, his dad who is from that part of Spain whilst his mum is from Madrid. It has been reported that his mum was an actress. However, we’re not entirely sure what his dad does for a living. We do know that he has a brother named Eriz. Rahmbo and his wife Kelley welcomed their first child into this world, a boy named Kepa Cahill Rahm, on the 3rd of April, 2021. This couple is now expecting their second baby boy too.

With 7 career wins, 8 second-place finishes, and 9 third-place finishes, this golfer has already made over $34 million in career earnings from playing golf. Our calculations tell us that he could be worth $30 million at least.

How much does Jon Rahm earn per year?

As far as we know, this golfer is endorsed by TravisMathew, Callaway, Silverleaf Club, Rolex, Mercedes Benz, Cuater footwear and Blue Yonder. It has been reported that he makes close to $5 million a year from his sponsors. 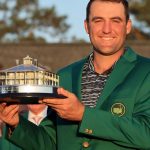