Trinity Rodman is a forward who plays for the Washington Spirit in the National Women’s Soccer League. She signed with the Washington D.C., based club in January 2021 when she was picked by them as the second overall player in the 2021 edition of the NWSL Draft. Trinity debuted for the team on April 10, 2021, against North Carolina Courage. Although she enrolled at Washington State University, Trinity never got an opportunity to play for them. The pandemic cancelled her freshman season, and Trinity decided to become a professional instead of going back.

Trinity Rodman is a young and aspiring player, and you have no chance of being with her. If you fancy this young woman, you’ve got to read this because she already has a boyfriend. Trinity has been in a relationship with her man for over three years now, and he happens to be her high school sweetheart.

Who is Trinity Rodman currently dating?

A young man named Riley Majano from Orange County, California stole Trinity’s heart whilst they were in school. He is a baseball player and currently plays for Towson University’s baseball team. The pair fell for each other, went to prom together, and have been madly in love ever since. Details about their relationship came to light when they took to Instagram to express their desire. Since these two are just getting started with their careers, they still have a long time to go before deciding on tying the knot. Riley and Trinity don’t have any kids together.

Trinity Rodman was born on May 20, 2002, in Newport Beach, California, the United States. Her father is none other than legendary basketball player Dennis Rodman. Trinity’s mum is Michelle Rodman, and she has two siblings named Dennis Rodman Jr. and Alexis Rodman. Trinity, unlike her father, took an interest in football and began playing the sport when she was just four. Dennis, her father, wasn’t too bothered by her lack of interest in his sport of choice. The man let his kid pursue what she liked, and she joined a team called So Cal Blues when she was ten years old. After going on a streak and completing high school, she committed to the University of California at Los Angeles before deciding to play for the Washington State Cougars. The rest? – You know the rest.

Trinity Rodman is a self-made girl. It is safe to say that she is who she is because of her talent and hard work. This young woman has already stepped out of her father’s shadow and is destined for greater things in the years to come. Trinity, thanks to her achievements, enjoys a paid partnership with Adidas. It is understood that the German company pays her about $5,000 a month to help promote their products. This equates to about $60,000 a year. Trinity has also worked with other brands such as Secret deodorant in the past. We estimate her net worth to be about $25,000 as of writing.

How much does Trinity Rodman earn?

A talented player who gives her all on the pitch, Trinity Rodman’s contract with the Washington Spirit sees her make an estimated $240,000 a year or about $20,000 a month. This is a substantial amount, considering that this is her first professional contract ever. 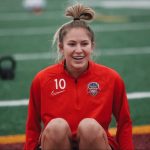 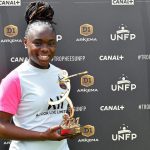