Khadija Shaw is the celebrated Jamaican footballer who plays as a Forward for Manchester City and the Jamaica women’s national team. She has risen to international fame recently, due to which her achievement list is slightly shorter than other players. Khadija began her career playing for Eastern Florida State College, where Khadija earned NSCAA first-team National Junior College Athletic Association All-America honors(2016). She has played for the University of Tennessee after transferring in 2017.

Khadija focuses on her career, due to which she does not have time to for her lovelife. Khadija has an immense, undying love for football that triumphs any desire to have a boyfriend. She also does not have a record of ex-boyfriends because she was busy overcoming adversity as a child. Her dating life, for now, is a blank slate.

Who is Khadija Shaw currently dating?

Khadija Shaw is not dating anyone at present. She has not revealed her plans regarding her love life. Her first love is football, and any man would be lucky to come second. Besides, Khadija is still young and has a long way to go. She might earn a few titles before thinking about romance. When it comes to Khadija, her career will always remain more significant than any romantic partner.

Khadija comes from a humble background. She has risen to greatness from a place where she had nothing. The only thing Khadija had going for her was her supportive family. She had 13 siblings in Jamaica, out of which four died in unfortunate events. Khadija grew up in Spanish City, Jamaica, a region plagued by gang violence. She grew up in a neighborhood surrounded by insecurity and a dire lack of resources. Her resilience in the face of adversity is an inspiration for everyone around the world.

Despite the crippling poverty, Khadija managed to achieve high grades in her school. She was able to win a scholarship, enabling her to study in the US. However, someone recognized her passion and talent for football in Jamaica. After reaching the USA, Khadija made the best of her skills to get accepted into professional football clubs. It is easy to assume that Khadija had the gift of athletic abilities, but she had to overcome a lot of emotional turmoil to attain success.

As a child, Khadija often confided her feelings to her mother. She would tell her mother whenever she felt demotivated due to the violence in her neighborhood. However, her mother would only advise her to block out the negative feelings and focus on football. Her brothers supported her too. She learned to play football from her elder brother, Kentardo. He was the one who gave her the nickname “Bunny”, which she grew to love despite hating it initially. She got the nickname due to her love for carrots.

Her father was a shoemaker, and her mother, a chicken farmer. Her mother was initially against her love for football because she thought the sport was too rough. She was only convinced when the Jamaican Federation noticed her outstanding skills and praised her. Soon, Khadija was representing her country at the tender age of 14. During one such international match, someone recognized her talent, leading her to access scholarships. Today, Khadija wants to help make the situation of Nigerian football lovers better.

Khadija is more inexperienced than many other football players, but she achieved a lot more! Thanks to her efforts, Khadija has a net worth of 150.000 dollars at present. Her net worth shot through the roof as soon as she first appeared on television. Khadija has played for two football clubs so far but has already amassed such a high net worth. As she wins more matches and titles, her value and popularity will increase.

How much does Khadija Shaw earn?

Khadija has not revealed her exact salary. However, it must be high considering her 150.000 dollar  net worth. Football is the central source of her income. However, she recently opened an Instagram account where she will do sponsorships in the future. As she gains experience in football, she will make more money. 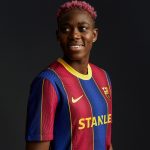