Ashley Sanchez is a professional football player who plays for the Washington Spirit in the National Women’s Soccer League. She was selected by the Spirit as the fourth overall player in the 2020 edition of the NWSL Draft. A forward player, Ashley Sanchez, represented the UCLA Bruins between 2017 and 2019. Ms Sanchez had a three-year career at UCLA, scoring 23 goals and assisting on 42 others. The Spirit traded forward Mallory Pugh of the United States Women’s National Team to Sky Blue FC in exchange for the fourth overall pick in the NWSL draft. They utilised it to choose UCLA junior forward Ashley Sanchez. The Washington based team also got the fourth and eighth overall picks in the second round, as well as a first-round pick in the 2021 Draft.

Who is Ashley Sanchez currently dating?

Josh Woods is his name and the man, just like Ashley Sanchez, is a footballer too. Except he plays the sport with his hands. Josh is a BC Lions Linebacker at UCLA and is probably looking at becoming a professional too. The big man is a charming bloke, and there’s no reason for Ashley to be looking elsewhere for now. He even runs his own podcast, and that should definitely seal the deal for her.

Ms Sanchez was born Ashley Nicole Sanchez on March 16, 1999, in Pasadena, California, the United States. The 5 ft 4 in forward’s parents are Julie and Ralph Sanchez. She has two older siblings named Evan and Sierra and attended Mountain Park High School and also Monrovia High School. Ashley’s career began when she signed up with Santa Anita SC as a youth player. After her initial development, she further honed her skills at Legends FC and So Cal Blues. Upon graduating from High School, Ashley Sanchez decided that she’d become a professional footballer. That’s how UCLA came into the picture. Thanks to their solid soccer program, Ashley had no trouble choosing them. Her folks were equally excited that one of their own was looking at a career in professional sports. They supported her throughout the way and the rest, as they say, is history.

Ashley Sanchez is an Adidas athlete. Signed to Wasserman, she has also worked with brands such as BioSteel and Excedrin. This young woman is fairly new to social media circles. Ashley needs to increase her reach if she is to attract more brands. Based on all the information we have, we think Ashley Sanchez could be worth about $75,000.

How much does Ashley Sanchez earn?

Washington Spirit traded Mal Pugh to have her, and that tells us just one thing. They consider her to be super important, and that means that they’ve offered Ashley a hefty salary. From what we know, we think that this forward makes at least $25,000 a month, or $300,000 a year. 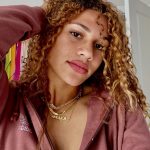