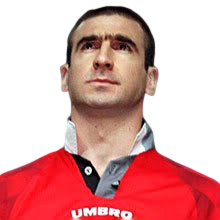 He was a showman on the field. A motivator and a leader, his game involved taking responsibility and getting the job done. Everyone took note of him when he moved to Manchester United in 1992. He made an immediate impact and helped the Red Devils to a Premier League title. It didn't surprise us when he became an actor after retiring from the sport in 1997. He was born to be in the spotlight. Acting has given him a platform to portray his creative side. He has also been involved with Nike after retirement. We think that his net worth is in the region of 30 million Euros.

What does Cantona currently do?