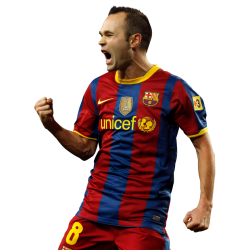 He had a long-standing relationship with Nike that ended when he signed a big deal with Asics, the Japanese giants. He also has a deal with EA Sports that has netted him a lump sum. A very prudent person, this seemingly good-natured footballer is very careful when it comes to money. His long career with FC Barcelona, combined with all the sponsorship deals, means that his net worth is about 110 million Euros approximately. He was obviously always one of the top earners at FC Barcelona and we all know how much money they spent on their legends. El Illusionista has definitely had his fair share of salary wealth and now that he's close to retirement he will surely enjoy his retirement fund. Oh yeah, and he is a winemaker!

What does Iniesta currently do?