Michael Grzesiek, aka Shroud, is a Twitch streamer who, since 2013, has been entertaining viewers with his gameplay of video games. Born on the 2nd of June 1994 in Toronto, Ontario, Canada, this young man started out as a competitive eSports player before he began streaming his content. Manajuma and Exertus eSports were among the first eSports teams he played for. As a Counter-Strike: Global Offensive player, this young man began making a name for himself in the industry. He played competitively between 2013 and 2017 before taking a break to focus on his streaming and other stuff.

Shroud returned to professional gaming in 2022, but by then, he had already turned his passion into a successful career. This young man’s Twitch has racked up over ten million followers on Twitch, and he has become one of the top streamers on the platform. People have been watching and subscribing to his channel for years, and now he has fans all around the world. Shroud’s Youtube, a channel he started in 2014, now boasts nearly 7 million subscribers. All of this success wouldn’t have been possible without a lot of hard work and dedication.

What is the Shroud Setup

A dedicated player like Shroud needs some of the top tools to get his job done. As you can clearly see, he favours Logitech for some of the peripherals he uses.

This young man streams with the same setup that he uses for gaming. He’s a gamer first, after all.

As someone with incredibly youthful looks (read schoolboyish), one might have thought that he may have had a hard time finding a girlfriend. But Shroud isn’t just another schoolboy. Hannah ‘bnans’ Kennedy seems to agree with us. She’s been his girl since April 2019, at least.

Who is Shroud currently dating?

Hannah appeared on one of Shroud’s streams and just randomly conveyed the news that she was with him. There wasn’t a lot of hoopla surrounding that event. She’s the one our man has been dating. In fact, these two are in a live-in relationship.

This is another streamer who has kept details about his parents and family life private. However, we do know that his folks, both of them, have Polish roots. He was born in Canada and considers himself to be a proper Canadian. There’s no information about his siblings, though. Shroud doesn’t have any kids with Hannah yet.

Represented by Loaded.gg, this young man has won a lot of money being a competitive eSports player. He has also earned a substantial amount from streaming his gameplay. Our records indicate that this young man’s net worth could be about $8 million, approximately.

How much does Shroud earn per year?

Shroud works with Logitech and J!nx. Nitrado, Hot Pockets, Postmates, and Xbox, are a few other brands he’s involved with. This young man makes close to $1.5 million a year on average. 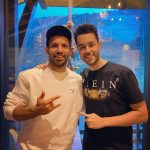