Tierna Lillis Davidson is a defender who plays for the Chicago Red Stars in the NWSL. The Bridgeview based team have been thanking their lucky stars since the day the NWSL changed their rules to allow for players to enter the draft before they had exhausted their college eligibility. That’s how they could get their hands on this defender. As soon as Tierna Davidson declared for the 2019 Draft, the Red Stars knew that they wanted her. They made sure that they got what they wanted by picking her as the 1st overall player in that edition. The team hasn’t let her go anywhere, and she has remained with them since. Tierna attended Stanford before deciding to become a professional.

Ms Davidson was just 13 when Megan Rapinoe came out as gay. Was she the reason that our centre back is who she is today? We wouldn’t know for sure but what we do know is that this player is openly gay. She has been comfortable in her own skin and has been vocal about her orientation from the beginning.

Who is Tierna Davidson currently dating?

Tierna has been in a relationship with a young woman named Alison for quite a while now. The two of them met whilst at Stanford. Alison used to play in goal for their university, and that’s how and when they started having feelings for each other. Tierna’s career has taken a different path from Alison’s, but she has remained strong in her relationship with her partner. Alison’s the one for her, and it looks like these two could go the distance.

Ms Davidson was born on September 19, 1998, in Menlo Park, California, the United States. Greg Davidson and Helen Wilmot are Tierna’s parents, and she has a brother named Rory. Tierna attended the Sacred Heart Preparatory in Atherton, California, and graduated in 2016. She was a member of the Student Executive Council at Sacred Heart Preparatory throughout her junior and senior years and captained her high school squad in 2014-15 and 2015-16. Tierna also coached at the Sacred Heart Preparatory soccer camp as a student assistant coach. It’s quite clear that she was into football even as a young girl. Tierna Davidson attended Stanford between 2016 and 2018. She majored in Management Science & Engineering there.

Tierna Davidson enjoys a respectable following on social media. This young woman is signed up with Wasserman and has Nike’s backing. We heard that she’s very picky about the brands that she works with. This woman believes that she can’t negatively influence another person, especially a young child. That could be the reason for her picky nature. Nonetheless, this defender has an estimated net worth of about $300,000.

How much does Tierna Davidson earn?

Tierna Davidson is an indispensable part of the Chicago Red Stars. The team pays a premium for her services, and she delivers for them on the pitch. It has been reported that this young player makes $15,000 a month from her contract. That’s about $180,000 a year. 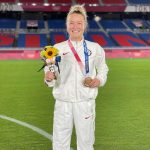 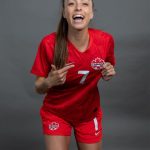