Stefanos Tsitsipas is making rounds in the news for all the reasons ranging from good to not-so-good. However, we are here to focus on the good reasons, and one of them is the news of his girlfriend – Theodora Petalas. Theodora and Stefanos are a power couple because both of them are insanely good-looking. This article has all the available information about this cutie and her life with the tennis star.

She Made Stefanos Pursue Her

Theodora is an NYU graduate with a degree in project management, so one can assume that she is a smart girl. According to the tennis player, he met Theodora three years ago through family friends and maintained contact with her throughout that time. At one point, their attraction grew too intense, and they had to get into a romantic relationship. He met her for the first time in New York, and Theodora was shy. She did not return his feelings at that time, so he did not know what their future held. However, a year later, they met in New York again, and Stefanos grabbed the opportunity. He asked her to go on a date with him to Brooklyn and click some pictures. Fortunately, the otherwise shy Theodora liked the idea and agreed to go on a date. According to him, those initial pictures are still his favorites to this day.

Their Love Has Conquered Their Long-Distance Struggles

They have been together since that second date, and their relationship is full of love. Stefanos has a lot of affection for Theodora because she supports him in every way she can. She is his emotional pillar and the sweetest person he has ever met.

They maintain a long-distance relationship because Theodora lives in London while Stefanos is busy with his tournaments. However, they have managed the long-distance struggles excellently. Theodora flies to his competitions when she has the time and offers her support. Stefanos also says that their personalities match on every level, making the relationship better and easier.

She Helped Him Look Better

Stefanos and Theodora have talked to each other every day for two years, and they would not have it any other way. Theodora also helped her boyfriend overcome his fashion struggles. According to the tennis player, he did not have a good fashion sense until Theodora came into his life. It made him invest in clothing more, and he feels good about himself. Thus, Theodora helped Stefanos raise his self-confidence in several ways. They have agreed that earthy colors suit him the best and do not like anything too flashy.

Their Relationship Was A Secret For Two Years

Their relationship only became public when someone clicked their pictures on a summer vacation. It may seem that they have started dating recently, but Theodora and Stefanos have been together for a couple of years. It is impressive that they maintained a relationship while living in different countries and having different schedules.

Theodora Has Not Revealed Anything

A lot is unknown about Theodora and her life, but she seems to love fashion and fitness. She has a stunning figure and the cutest face ever, thanks to her hard work in the gym. Recently, pictures emerged of Theodora and Stefanos training together, and she seems to have a flexible body. The body measurements are unknown, but she can rock any outfit. Theodora also does not have an Instagram account or other social media profiles. She appears to be a person who values her privacy. Unfortunately for her fans, she will only appear in public when someone pictures her with her boyfriend. Due to her educational qualification, it is safe to say that Theodora has a corporate job in London.

She has not divulged information about her parents or siblings, but that may change in the future. Sometimes, girlfriends of tennis stars take time to open up to the public. Besides, Stefanos already mentioned that his girlfriend was shy, so it may never happen.

Irrespective of the limited information, Stefanos is happy with his girlfriend. Theodora and Stefanos wanted to keep their relationship under the wraps forever, but that is impossible for a celebrity. Nobody knows if they will go on the marry in the future, but they are happy right now, and that is all that matters. 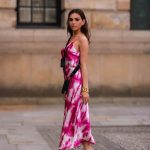 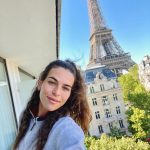