Alvin Kamara is a famous name in the American football industry. He works as the running back for the New Orleans Saints of the National Football League. His life is all about his relationship with American football. However, he has found a unique person in 2021. The name of that person is Te’a Cooper, and she is also a sportswoman. She is a basketball player of the WNBA. This woman is a very famous figure in the American sports industry. This article will tell you all about her relationship with Alvin Kamara.

She Is As Famous As Her Boyfriend

Te’a Cooper has a long relationship with basketball. She played the sport in college and high school. Thanks to her efforts, her school remained undefeated for a long time. Phoenix Mercury selected her as the 18th pick in the 2020 WNBA. Unfortunately, it was the time of the global pandemic, due to which Phoenix Mercury cut her out of the team. However, the Los Angeles Sparks picked up Cooper to play as a point guard. Her career has skyrocketed from that moment. Cooper is a famous basketball player in America and a fan-favorite icon.

She Has A Straightforward, Fiery Personality

Te’a does not beat around the bush while expressing her opinions and feelings. She is straightforward about everything in her life. She does not like to have any obstacles between her and her career. She has made it clear that her career is her priority in life. Her fiery personality makes her attractive. It is an admirable quality for a sportswoman.

Te’a does not sugarcoat anything for anyone. She says things as she sees them. Her straightforward personality is one of the things Alvin loves the most about her. Her honesty and loyalty also make it easy to be her friend.

Te’a is also an aggressive person during sports tournaments. She goes after her goals relentlessly without looking back.

Te’a And Alvin Had An Unexpected Romance

Te’a always knew about Alvin but did not pursue him romantically. Te’a was in a romantic relationship with her ex-husband Dwight Howard during that time. Cooper and Howard had a long-term relationship and appeared to love each other. They had an engagement in 2019, and everything seemed well. Unfortunately, their relationship did not work out, and they broke up in 2021. Cooper did not reveal the details about their breakup. However, she got into a relationship with Alvin immediately after her split from Dwight.

Cooper and Kamara kept their relationship a secret for several months. They began seeing each other in July 2021 but did not tell anyone about it. However, their followers spotted them together and speculated that they were in a serious relationship. In December 2021 and Cooper confirmed their romantic relationship.

Te’a Is One Gorgeous Woman

Te’a has a healthy, athletic figure. It is all thanks to her basketball training and workout regimes. She likes to keep her hair long, making her look gorgeous. Cooper is a tall woman standing at 5 feet 8 inches.

Te’a Cooper is a famous sportswoman, but she loves to dress in girly clothes. She has a feminine fashion sense. People praise her for her beauty and intelligence. She weighs 73 kgs and has beautiful curly hair and a dark complexion.

She Is Also A Model

Te’a is a good-looking woman, due to which she works as a model. However, it is not a full-time job. Modelling is not even a side hustle. It is her hobby. Cooper loves fashion, and she has a unique sense of style. She loves to do her makeup and hair. Several modelling agencies have approached her for work, but she does not entertain them.

Te’a updates her Instagram account regularly with photos of her modelling shoots. She has also uploaded a music video and several reels. She is not afraid to declare her love for her boyfriend on Instagram. She also posts several pictures with her family members. However, they do not appear as frequently as her boyfriend. She uses Instagram for professional reasons. Hopefully, Te’a and Alvin can make it work in the long term. Their relationship looks promising due to their matching personalities. 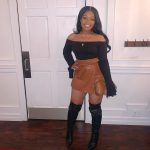 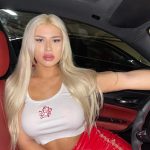