Jordan Love is a professional American football player with a lot of fans. He has stayed on top of his game for a long time. This NFL player gives it all during the football match every time. He does not hold back while playing, which is one of his best qualities as a sportsman. He also has a beautiful girlfriend who is into sports. The name of his girlfriend is Ronika Stone. She is a professional volleyball player. She is also famous all across America due to her excellent skills. However, there is a lot to know about her. This article will tell you about the enthusiastic and exciting girlfriend Jordan Love.

Ronika Is An Attractive Sportswoman

Ronika has a lean yet athletic figure that makes her look strong and sexy. She has straight black hair. She usually keeps it open to accentuate her beauty. She has excellent facial features with a radiating smile. People have commented on her looks, appreciating her youthful figure. She enjoys the attention of people.

She Has Enjoyed A Successful Sports Career

Ronika was born in New Jersey in 1998 on 7th June. Her nationality is American. She enjoyed a childhood full of happy memories with her loving parents. She was always talented at sports and languages. She is also an extrovert and likes attention from the public. It is why she graduated in journalism from the University of Oregon. She played volleyball in university and became famous for her excellent academic and sports skills. She was also an attractive woman, due to which more people noticed her. She has also played volleyball for a French team called Valero Le Cannet.

She Has High Hopes For Her Career

Ronika went with the flow throughout her childhood and university education. She did activities that were within her talent and skills. Her interest in sports, especially volleyball, increased with time. However, she did not know what she wanted to do in a professional career. She did not consider sports in her career choices even though she liked engaging in them. Fortunately, she found a field that was the perfect mix between sports and journalism. She decided to become a sports reporter. According to Ronika, she cannot imagine doing anything else; she also cannot live a life without sports.

She Is Open About Her Relationship With Jordan

Most WAGs avoid appearing publicly with their partners. However, Ronika is not among them because she is expressive about her relationship with Jordan Love. She has cheered for him in football stadiums. He has also expressed his love for her. It is unclear when the pair met for the first time. However, one can tell that they are deeply in love. They support each other in all walks of life. They have immense respect for each other. They have also been together for a long time. Hopefully, they will reveal the details of their love story one day.

Ronika Has An Athletic Background

Ronika has always been interested in and exposed to athletics. It is because her father was an NFL player for 13 seasons. He has won several prizes in his life.

Her younger siblings are also into athletics. The family is obsessed with sports, especially NFL and volleyball. Ronika is lucky to have a supportive family that helps her achieve her goals. She is open about her affection toward her family. She often mentions her mother in her Instagram posts. One can tell that she has a bright future. It is because she is a hardworking woman with a thirst for knowledge. She has high ambitions and expectations for her future. Her parents and siblings are grateful to love and care for her.

Ronika and Jordan are lucky to have met each other in the youthful years of their life. They have several happy years in the future. One can tell that they care immensely for each other. Their personalities are similar, due to which they get along well. They are career-focused individuals who do not make compromises. They understand the right way to balance their career and romantic relationship. Hopefully, fans will get to see more of this lovely couple. 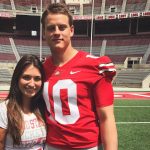