We peek into the life of Rachel Roberts and know the couple a lot better till the end. You’ll definitely know what made this Scottish footballer fall hard for this woman.

Rachel Roberts and Andrew Robertson share a beautiful story that goes way back. Who knew a teenage love could turn into something this fascinating? Their fans and followers have always been mesmerized by the story they share. Even though they haven’t gotten married yet, they both are engaged and plan to get married quite soon.

If you are curious enough to know more about this Scottish lady, then read on!

Who Is Rachel Roberts?

This 25-year-old beautiful Scottish lady caught our best left-backs eyes a decade ago. Yes, you guessed that right; he has been hooked ever since then. Born in Glasgow, Scotland, Rachel completed her entire education in Glasgow. She graduated from the University in 2016, but the beauty with a brain always aimed at working on her own.

Soon the Scottish lady started off her own UK-based gymnastic clothing brand called Orosport. This women’s sports clothing brand has a beautiful collection and an impressive customer base. Needless to say, it’s continuously growing. It also sells dancewear for teens and adults. Apart from selling clothes, some other accessories like scrunchies and handbags are also available.

Before accomplishing her dream of being her own boss in 2015, Rachel worked at a banking company. She has always been good with numbers, so she handles the finance department.

For more than three years, Rachel worked as a Customer Support Advisor at John Lewis. Dealing with varied customers improved her communication skills, and she became a pro at dealing with people. Her role also included training and advancement of new joiners. Whether it’s email or phone conversation, Roberts was quite good at both.

How Did The Two Meet?

Andrew and Rachel met when they were studying in St. Ninian’s school and started dating shortly after. Even though Rachel is one year younger than Robertson, their social circle was the same, which led to their connection.

They are often seen being nostalgic about the old times the two high school sweethearts spent together. This decade-old love story went through ups and downs, but the two always grew through the downfalls. Rachel has been extremely supportive in his career and ensures she motivates him at all times.

The couple has made it a point to celebrate all the little wins, and their love for food has gotten them more closely than they thought. They are often seen exploring different restaurants and trying dishes one could hardly pronounce. They indeed are made for each other.

It’s true the couple haven’t got married yet, but they are blessed with two beautiful children. Rachel gave birth to her first child, named Rocco, in 2017. That time was exciting as well as intimidating for the couple since giving birth and taking care of a little one is no easy task. Happily, they took care of little Rocco quite well. Andrew also accepted how he started valuing the beauty of moments more after the birth of Rocco. After all, daddy wanted to spend as much time as possible with the lucky little charm.

For the two, their son becomes the center of their universe. True love can be seen when it doesn’t change with time, money, or fame. About the high school gang, the two love birds are still in contact with most people they hung out with.

Soon after, the couple was blessed with a cute little baby daughter named Aria. Apart from being the couple goals for their fans, the two often engage in charity work. Robertson wrote a book in 2020, the proceeds of which go entirely to charity.

This was all about Rachel Roberts, the beautiful, intelligent, and goal-oriented person Robertson can’t get enough of. This family of four live their life to the most and make the best out of every moment. 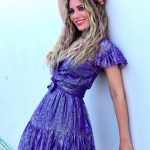 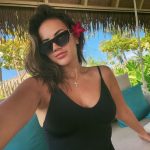