Two times Formula One World Champion Fernando Alonso is an accomplished racing driver. But, did you know who his long time girlfriend is? If you knew that it was Linda Morselli, then you’re doing well, so far. We think there’s more to her than just her pretty looks. Why don’t you decide for yourself by reading this post?

Biography of an Italian media personality

Linda Morselli was born on November 15, 1988, in a commune called Giussano. It is in the Province of Monza and Brianza in the Italian region of Lombardy, located about 25 kilometres (16 miles) north of Milan. She grew up near Milan all her life and spends most of her time in the fashion capital. Linda’s parents are not as keen as her to be in the public eye, although her mum has made more than an appearance on Linda’s Instagram.

Linda Morselli’s career. How did it all start?

Everything began when this Italian beauty was eighteen. Entering the Miss Italia pageant in 2006, Linda Morselli was named one of 30 finalists, and she was named Miss Eleganza. The entire country, if not the world, spotted this beautiful woman. Linda began attracting interest from various people in the fashion world. She decided that modelling and the media were going to be her career choice. Since she began, Linda has travelled all around the world for her work. She collaborated with internationally known photographers on photo shoots, editorials, covers, and commercials for several prominent fashion brands.

The next logical step in Linda Morselli’s career

Linda starred in Marco Carta’s “Quello che dai” music video in 2010. This was a turning point in her career because Linda Morselli, the model, was turning into a full-blooded entertainer. Thanks to her performance, Linda discovered that she had it in her to be a performing artist. Since then, Ms Morselli has appeared in numerous TV shows and also a few films.

Linda Morselli and her best friend Rachele Fogar competed in Pechino Express 7 – Avventura in Africa, a reality television competition show in 2018. They finished third in the competition. On the show, the two were dubbed “mannequins.” Atelier Emé’s “White Party” featured Morselli and Rachele Fogar in 2018. Linda also appeared in an episode of Italia 1’s Drive-Up in 2019 when she and Rachele Fogar visited and explored Alta Badia over the Christmas season. In the year 2020, she and Fogar participated in Marcello Cirillo’s TV show Casa Marcello, in which they toured and explored Sicily on a tour they dubbed “Sicilia Express.” Linda also played a minor role in a Spanish film in 2020.

Fernando Alonso was a notorious womanizer before dating Linda Morselli. The racer had his life turned upside down when he got involved with the Italian model in mid-2016. Previously, the driver was seen with a variety of models, many of them were from the former Soviet Union, including Dasha Kapustina and Viki Odintcova. He was also involved with Lara Alvarez, the Spanish-language host of the television show Expedition Robinson and the ex-girlfriend of Real Madrid defender Sergio Ramos. Fernando has cleaned up his act and is loyal to his girl. Did Linda train him to be this way? We don’t know about that, but we do know that this pair is in it for the long term. Linda Morselli and Fernando Alonso aren’t married yet, though. They haven’t got any kids together, either. 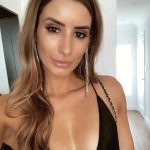