Read on to know everything about the England star’s gorgeous girlfriend, Harriet Robson. Mason Greenwood has stunned the world with his unbelievable talent, and we’re yet to see the best. But who makes his heart skip a beat?

Some quickies about Harriet Robson

Harriet Robson has to be one of the most secretive wags out there. Not much is known about her childhood, personal life, and family. Even the stunner’s date of birth is a bit of a mystery. However, we do know that Harriet was born near Bradford and went to the same high school as her boyfriend, Mason. Both went to Mersey School in Greater Manchester, and we believe that’s where the duo met and began dating. From this, we assume that she is somewhere around 18 years old.

How does Harriet Robson earn a living?

Harriet Robson is a model by profession who earns her bread and butter through sponsorship campaigns. She is also a fashion influencer of sorts, having shared insightful fashion and beauty posts. Her Instagram feed consists of sultry pictures of hers, and some of them even feature the Manchester United star boy, much to the glee of his fans! And with covid restrictions in place, she has been uploading quite many cozy pictures of hers and her beau of late. The model’s relationship with Mason certainly made her popularity boom on social media further.

Harriet and Mason indeed know a thing or two about sneaking after the class and stealing those brief love moments in school. The couple started dating during high school, back in 2019 and continued their amour even after graduation. They publicly celebrated their 1-year anniversary. We wonder if Harriet ever paid a visit at Carrington and watched her beau smash those goals in. Some sources say that the duo is even engaged, despite being just a pair of teenagers! Well, as long as they’re happy, who are we to the complaint.

The couple faced their big romantic challenge when Mason made a blunder of inviting two Icelandic models to his hotel room after England’s victory in Reykjavik. The invitation was sent by Both Mason and his England teammate, Phil Foden. This incident caused much uproar amongst the fans, the England team, and even the officials of FA, who allegedly issued a disciplinary action against the duo, but no official confirmation came in this regard. Though, this must have caused much distress to his young girlfriend back at home, as the rumors of the pair’s separation took rounds in the media. However, it seems the love triumphed over a little misunderstanding, as the two were back together soon enough!

The youthful pair under lockdown

The lockdown went hard on a lot of people; Harriet and Mason especially endured a long separation. The couple was victims to the severance when England announced a long, nation-wide lockdown. Some sources suggest that the two were living apart throughout this time, which would corroborate the rumors of their brief break-up during the lockdown. Others, however, indicate that they were confined together, which would explain the adorable couple pictures they uploaded.

Harriet is a complete success on Instagram. She frequently uploads beautiful pictures while trying on different outfits and fashion trends. Instead, she is the one who sets the trends with her mega fashion influence on the platform. From jet black bikinis to swimsuits to joggers, this woman has rocked up all the outfits available under the sun and increased her dominance on the Instagram manifold. Her liaison with the Red Devi helped her in blossoming her followership, taking her popularity to new heights. The model is indeed on the path to becoming a supermodel!

Harriet Robson continues to work in the field she loves, fashion and beauty, while also allotting time to her relationship with Mason. Although she hasn’t been spotted around Old Trafford much, we do know that she cheers for the red side of Manchester from the comfort of her home, waiting for her love to smash the ball behind the net. The pair has undoubtedly faced many challenges in their relationship since 2019, but they emerged from all the hardships stronger than before! 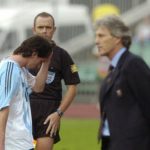 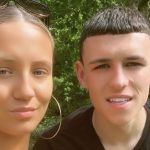