David De Gea has proven just why he is one of the best goalkeepers in the world time and time again. But who makes Manchester United’s shot-stopper skip a beat when he is not busy making fabulous saves? That would be his amor, Edurne Garcia! Read on to know everything about this Spanish beauty!

Edurne Garcia a singer based in Spain. She was born on December 22nd, 1985, in the city of Madrid, as the only child of Yolanda Almagro and Tomas Garcia. Though, nothing much is known about what her parents did for a living. The star realized her passion for singing at quite a young age and joined a music group when she was just 9. Edurne also started acting when she was a child. The passing ages only made the stunner more talented and beautiful.

The 5’4″ actress has all the qualities that one needs to make it big in the world of glam. This is the reason why Edurne had a quick rise to fame for her wide-ranging skillset.

The vocalist kissed the heights of success when she appeared in the Spanish casting show Operacion Triunfo. This was her first major gig, and naturally, important people around the country noticed the stunning physique and beautiful voice of the sensation. The star then went on to represent Spain in Eurovision Song Contest 2015 and finished 21st. Her career started in singing with Sony BMG Spain. It was in 2006 that the musician’s first studio album, “Edurne,” was released.

Edurne also became quite famous on social media platforms. She now has over 1.8 million followers on Instagram, and the stunner keeps them entertained through her divine pictures! The beauty is seen posting pictures of hers, her child, and her famous husband, who often showers his wife with lovely comments under her photos!

She Blesses Our Televisions

Edurne has frequently appeared on TV shows and films and received acclamation on both mediums. Notably, the stunner was lauded for appearing in “Tu Cara Me Suena’s” third season and winning it. By this time, her singing career was flying high, as she was being compared with the likes of Rihanna, Lady Gaga, and Madonna. Considering the feats, she was achieving on stage, and behind the scenes, her relationship with the Red Devil received much media attention. The collective popularity of the two made them a hot topic in magazines. Even the fans couldn’t help but stalk the gorgeous woman.

She Fell In Love With The Manchester United Star

Edurne and David have been in love with each other for a long time. They tied the knot when the two realized that they couldn’t spend their lives apart, but the television star couldn’t give up on Spain, even if David had his job in Manchester. Edurne, who owes her allegiance to Spain, is often reported to dislike the Northwestern city of England.

This frequently spurred the rumors of the goalkeeper considering to move to Madrid and join the white side of the city. But much to the glee of the Red side in Manchester, their star keeper hasn’t left their side and continues to serve faithfully.

The Actress Becomes A Mother

After being married to David for quite some time, Edurne became pregnant. She gave birth to an adorable baby. The player posted the picture of the infant’s fingers, and we couldn’t help but express our congratulations to the lovely couple on this milestone! It appears the stopper was always at the beck and call of his wife during and after her pregnancy, as his team gave him some time off of his shot-stopping duties to care for his lovely wife.

Edurne continues living in Spain. The knockout frequently makes a journey to the north to spend time with the love of her life, but as a loyal Spaniard, we know she wouldn’t give up on her homeland that easily. But the best part is, the duo makes it work despite the distance. If this is not what true love looks like, we don’t know what does! 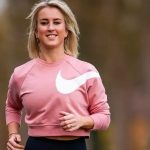 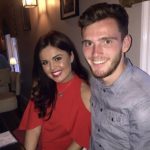