Gio Urshela is a professional baseball player from Colombia who has been playing in Major League Baseball (MLB) since 2015. The skilled player is presently playing for the New York Yankees, where he holds the third baseman position. Gio has played for several clubs throughout his career, ranging from the Toronto Blue Jays to the Cleveland Indians. He has had a passion for baseball since he was a little boy, and it was easy to see his exceptional physical abilities.

In addition to his talent, Gio has the physique of a sportsman. If you watch any of his matches, you will be aware of his exceptional skills and consistent performance as a player. The young talent was given a promotion to the Columbus Clippers in 2015 and was ranked by MLB.com as the Indians’ fourth-best prospect at the time. Urshela was promoted to the main leagues on June 8, 2015, due to his progression and accomplishments.

Because of his fantastic gameplay, Urshela made history by being the first Yankees third baseman to smash a post-season grand slam against the Cleveland Indians, which was the club he played for before. Gio is a prominent baseball player in MLB. Thus he receives a lot of attention, and it is not surprising that any lady would fall in love with him and want to marry him. But this great ballplayer had shared his love and married a stunning woman, Danna Delgado.

Danna And Gio Had An Extravagant Wedding

Not much information is available on how these two charmed souls first met and fell in love. However, in December of 2021, these doves finally tied the wedding after a long romance. In their respective wedding outfits, they both looked adorable. They had a wonderful time celebrating their big day with their loved ones and friends.

Recently, this lovely couple welcomed their first child, a girl named Gianna, and made the happy announcement of her birth on social media.

Danna Is A Social Communicator And Journalist

Danna is not just a loveable wife and mother but also an ambitious professional. In her Instagram and Twitter accounts, she mentioned that in addition to being a social communicator, she is also a journalist. There is not a lot of information accessible about her profession, but, as a journalist, it is her responsibility to provide the public with information and evidence in the most objective manner possible so that they may be informed about matters that are important to them. Her role is to provide the general public with factual information so that they may develop opinions and make choices.

Danna Is An Influential Figure On Social Media

Even though her Instagram profile is private, she has a following of 44.8k people. She also has a Twitter account, where she updates her followers and supporters on her life and what she’s thinking about various topics. The fact that they are a happy family of three is revealed in her profile on Instagram.

This stunning woman with blonde hair has a fantastic figure and always chooses to dress in clothes that are a good fit for her. Indeed, Danna is a WAG, and she has a really attractive character. She is someone who has a beautiful nature and spirit. In addition, she puts her commitment to her family ahead of all other priorities.

The flawless skin and dazzling eyes are gorgeous, and it’s no surprise Gio fell for her. The fact that she has such a toned and fit physique reveals how well she takes care of her structure.

Danna Values Her Family Above All

Danna can keep a healthy balance between her family and her profession. In good times and bad, she stands by her spouse. She has also been seen at family gatherings, showing her outgoing nature.

The pair has everything one could want in a family, making them an ideal to strive towards. Moreover, this strong duo is seen standing by and supporting one another.

Although we may not see many of these two together in public, we keep our fingers crossed that we will soon get a peek at this lovely pair. 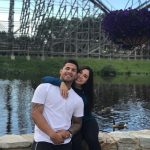 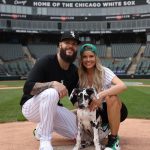