Russell Wilson is a celebrated NFL player. He has a successful career, and several people consider him an icon. This NFL player has inspired several youngsters to enter the NFL community. He also has a beautiful wife. Her name is Ciara, and she is a celebrity in the United States. She is a singer and a songwriter. All of America knows about her. People enjoy her songs all over the world. This article will tell you all about Ciara, the partner of Russell Wilson.

She Is A Beautiful Woman

Ciara has beautiful dark hair. She switches between curly and straight hairstyles. The singer likes to keep her makeup at a minimum to accentuate her natural beauty. She has pretty high cheekbones and a perfectly symmetrical face. One can see how the famous NFL player fell in love with her beauty. Ciara has several men swooning over her due to her mesmerizing physical features.

She Is A Celebrity As Famous As Her Partner

Russell Wilson is famous in the United States. He is like any other NFL player. Ciara is also a well-known person due to her RnB music career. She has written some of the best songs in the United States. People enjoy her music and resonate with it. She understands the perfect way of expressing her emotions through her songs. She has an angelic voice that adds a spark to her songs,

She Is Active Outside The Music Industry

Ciara is an excellent singer and songwriter, but her career does not end at music. She is also a well-liked model in America. She has appeared on several TV shows. Modeling agencies constantly approach her for gigs due to her beautiful physical features.

She Has Several Awards Under Her Belt

Ciara is a successful woman, and everyone can see it. This beautiful model and singer has eight Billboard Hot 100 top-ten singles in her career. She has earned four Billboard 200 top-five albums shortly after beginning a music career. Ciara is the winner of three BET Awards, three MOBO Awards, three MTV Video Music Awards, and one Grammy Award.

Ciara Is A Rich Woman

People love the music from this singer and songwriter. She has sold more than 23 million records worldwide. People living outside America also consider her an icon in the music industry. Her net worth is more than $20 Million, thanks to her successful music career.

Ciara has entered and become successful in the entertainment industry. She does not need anyone’s help. The singer knows that people love listening to her music. She believes in her talent and skills.

Ciara continues to achieve success in her music and modeling career. She is a hard-working woman with an uncompromising attitude toward her passion. She does anything and everything to be the best at her job. People love her for her extroverted and cheerful personality. She knows the correct way of making people happy through her music.

She has put smiles on the faces of millions around the world. It is all thanks to her music and creativity.

She Married Russell A Year After Meeting Him

She met Russell Wilson sometime in 2015 after his separation from his ex-wife. They hit it off immediately but kept their relationship a secret. Their ambitious personalities meshed well with each other. They both had a thirst for knowledge and skills to excel in their careers. Russell asked the big question during a vacation, and they tied the knot on July 6, 2016.

They have excellent chemistry unmatched by other couples. Ciara and Russell are the best examples of love at first sight.

Ciara and Russell are not afraid to express affection for each other on social media. They appreciate the support from each other but prefer to have an independent identity. They do not depend on each other for anything, and it is the best part of their relationship. They have been together for a long time, proving that love, at first sight, can work. 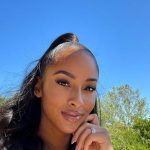