Camille Kostek is one of the most beautiful women we’ve ever come across in the history of our site. We are chuffed to chronicle her life in this post and know that you’re equally excited to get to know this beautiful lady. The only sad part about this piece is that this gorgeous lady is taken. Camille is in a relationship with tight end Rob Gronkowski.

Biography of a stunning model

Camille Kostek was born to be a model. This lady came into this world on February 19, 1992. Camille was born in Killingworth, Connecticut, the USA, to Christina and Alan Kostek. Her dad is a general contractor, whilst her mum used to be a gym manager. Camille Kostek has two sisters and a brother, all younger, and attended the Haddam-Killingworth High School. Ms Kostek pursued a Communications major at Eastern Connecticut State University.

A dance lover, this pretty woman began taking ballet lessons when she was just three. Camille was also enrolled in piano lessons when she was in the first grade. Music and dance were what kept her moving in her youth. It still does to this day, but the formative years were all about singing and dancing. Although she liked music, dancing turned out to be her number one passion. Camille dedicated herself to the art form. She began practising and spending a lot of time at the dance studio.

What came next for Camille?

When Ms Kostek was in the eighth grade, she was invited to be a part of the high school cheer squad. You don’t even have to second guess her abilities. Camille made it to the cheer team and was quite excited to be a part of it. Her life did get monotonous, though. But this young lady wasn’t going to let the boredom of routine ruin her plans. She even went to NYC on her free weekends to practice at the Broadway Dance Centre. Camille even played lacrosse for her school team. Is there anything that this woman didn’t do in her life at all?

By the time Ms Kostek had finished high school, she was faced with a dilemma. Camille didn’t know if she wanted to pursue dancing or sports. She chose the latter but realised that dance was her true passion. It also meant that now he had a chance to work towards becoming a Patriots cheerleader. If you had to stop and question if she made it, then you have not understood one bit about this woman. Let’s reiterate this for you – Camille Kostek has clear goals in life. Once she decides that she wants something, Camille sets everything else aside, works her arse off, and achieves whatever she was out to do. Don’t ever question her ambitions or her abilities to attain her goals ever again. By the way, this was just the beginning.

As a born performer who loved being in front of a camera or an audience, the transition from a cheerleader to a model was one of the easiest for this lady from Connecticut. Although Camille didn’t like the industry’s obsession with size, she realised that it was evolving and took a chance on it. Camille Kostek brought her portfolio to an agency. What happened next is pretty obvious by now.

Despite being a busy bee, Camille did have time for a man in her life. As a Patriots cheerleader, it wasn’t tough for her to get noticed by the former Patriots star. Rob and Camille began dating in 2015. They compliment each other nicely, and it feels like they’ve been together forever now. Rob hasn’t asked her the question yet. We hope he does sooner than later. We’d also like to see this couple start a family soon. Wouldn’t you? 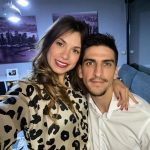 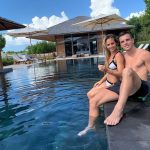