Theirs is a love story for the ages. Meet Anamaria Goltes, the girlfriend of Dallas Mavericks star Luka Doncic. If you’d like to know more about this lovely lady’s life, read on.

Biography of a sumptuous Slovenian

Anamaria Goltes was born on May 4, 1998, in Zagorje ob Savi, Slovenia.
Both her parents are Slovenian. She completed her early education in her hometown before attending the University of Ljubljana.

This Slovenian began modelling at a young age and was scouted by IMG models’ We Love Your Genes initiative, following which she moved to the United States.

Anamaria Goltes and Luka Doncic. How did it begin?

These two youngsters met each other when they were 12 years old. And no, it wasn’t at home in Slovenia. They were holidaying at a seaside town in Croatia when they met. Whilst most twelve-year-olds forget about the person they met on holiday, this couple turned out to be the exact opposite.

They kept in touch and began dating in 2016. This happened despite Luka moving to Madrid in 2015. These central European lovebirds persevered, and as luck would have it, they have gotten where they want to be now.

Is Anamaria Goltes married? What about kids?

Although this couple is nearly five years into their relationship, they’re still very young to tie the knot. Ana and Luka are just getting started with their respective careers as well. We think that they will marry, but not anytime soon. Whilst they’ve got plans to have children in the future, this couple is expected to wait until they’re married before starting a family.

Ana is a fashion content creator. She seldom refers to herself as a model. This Slovenian beauty is also keen on fitness and used to run a company that promoted fitness and exercise as a way of life. She primarily used her Instagram to do all the heavy lifting. However, this business is now defunct. Although Anamaria and Luka have dated since 2016, did you know that they split for a brief time in 2018? Just before Luka’s move to the NBA, he broke up with his girlfriend. However, they patched things up. She loves being in Dallas, and for her, it’s just home away from home. Ana is a dog lover and has two dogs named Hugo and Gia. This Slovenian beauty used to be a professional dancer before she took up modelling.

Who is Anamaria Goltes as a person?

A sincere and gracious girl, Anamaria Goltes is a beautiful human being who thinks about the welfare of others. She likes it when everything is on a fair plane. This beauty loves treating people with respect and is also in tune with her spirituality. She has a love for the outdoors and nature and is a keen traveller. If there was one WAG who was the most affected by the lockdowns, it had to be this girl. She loves travelling, and thanks to her work, had been jet setting around the world. Ana is going to be keen on wanting to get back on an aeroplane and begin her explorations.

A lovable WAG who is liked by her peers, this Slovenian has a caring and warm-hearted personality. She is an ambitious girl but leads a practical life. Ana knows her limits and plays to her strengths. This beauty is immensely mature for her age and is neither forceful nor selfish. This could be why everyone loves her. 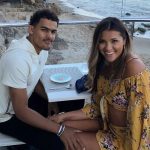 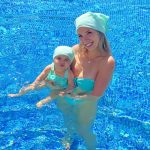