We’re planning on educating you about Amine Gülşe in this post. So sit back and enjoy this read about the wife of ‘The Assist King’ Mesut Özil.

Biography of a Turkish Beauty Queen

Amine was born on the 30th of April, 1993, in Gothenburg, Sweden. Her dad is an Iraqi Turk, whilst her mum is from Izmir. Amine finished her schooling at the International Highschool of Gothenburg Region in 2012 before pursuing an acting career. She also has a brother named Sahan.

How did she win the hearts of the Turkish people?

Mrs. Özil moved to Turkey as a youngster with high hopes. She knew that she had to reach the masses quickly to make herself endearing to the people. As a Turk who grew up in Sweden, she hatched a beautiful plan to do just that. Amine entered the Miss Turkey pageant in 2014. It was the quickest way to reach everyone. Not only did she enter, but she also went on to win the competition. She was crowned as Miss Turkey and Miss Turkey World that year. Amine entered the Miss World Competition too but went unplaced as South Africa’s Rolene Strauss won it.

Her first shot at acting was when she appeared as a guest in the Turkish teen drama Medcezir. She played herself in it. This Turkish beauty’s debut as a lead actor came in Asla Vazgeçmem. It was a romantic drama, and she was cast as Nur Demirağ Kozan in it. The show lasted for three seasons between February 2015 and October 2016. Amine also played the role of Suna in İkisini de Sevdim in 2017. The actress has also performed the role of Peri in the 2020 Turkish film Bir Türk Masalı.

Meeting Özil and the subsequent courtship

Amine had known Mesut several years before they began seeing each other. However, the first time their relationship was made public was only in 2017. The lady posted an image of the two of them holidaying together, which all but confirmed their relationship. Özil was the ideal match for her because, as an ethnic Turk who grew up in the west, he was the perfect mix that she wanted in a partner.

Her acting career was put on the back burner when she began dating the footballer. Amine was committed to starting a family and was overjoyed when the footballer popped the question. She married him on the 7th of June, 2019. Turkish President Recep Tayyip Erdoğan attended the wedding and acted as the groom’s best man too. Amine didn’t waste a lot of time planning her family either. She welcomed her first child with the footballer, a daughter named Eda, in March 2020.

How does a generous one sound? This lady didn’t win her Miss Turkey crown by chance. She followed up on what she said on stage that day by becoming an active philanthrope. Amine, along with her husband, offered to pay for the surgeries of about 1000 kids on their wedding day. This lady has involved herself in various other charitable projects and doesn’t look like she’s going to stop anytime soon.

What does the personality of a former beauty queen tell us?

Amine is a calm and composed lady whose charming presence brings happiness to everyone that surrounds her. She has quite a few weapons in her arsenal that she deploys to have her way with the rest of the lot. She’s a messenger of peace and would like harmony to prevail in this world.

A lover, she is the kind of person you’d send to end wars. All she needs to do is smile. 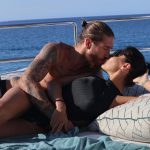 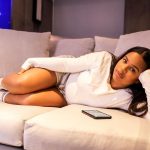