An American actor known for his amazing works and for being one of the finest producers, Scoot McNairy is quite well-known. His role in movies like Monsters, Killing Them Softly, 12 Years a Slave, and Batman vs. Superman: Dawn of Justice is quite renowned. Winning awards for his exemplary performance, he is known for his skills and professional life. But apart from this, he is also known for his love life with Whitney Able.

Aside from her career as an actor, American actress Whitney Able has also been featured as a model on many magazine covers. She is most recognized for her parts in the horror films All the Boys Love Mandy Lane and Monsters, but more recently, she has been seen in a new western titled Godless. Her appearances in both films brought her a great deal of notoriety.

Whitney Has A Special Affection For Spanish

Able has said in several interviews that she has a special place in her heart for the Spanish language. This is comprehensible, considering that she has lived in Mexico and Spain in addition to Houston, Texas, where she was born. As a result, she has significant experience communicating in Spanish, even though she was born in Texas.

Whitney’s Initial Appearance Was In the Age Of Kali

Age of Kali was the name of the low-budget film in which Able made her acting debut in the year 2005. In spite of the fact that it was named after a Hindu goddess famous for slaying demons with her sword and her noose, there was no true relationship between the two. On the other hand, it was meant to be a look at those who live outside of society, who aren’t going anywhere but are still looking for solutions to existential questions. Although Age of Kali was not a particularly noteworthy production, it was the first in a series of characters that Able would play within a short period. These roles include Rodney, Secrets of a Small Town, and Dead Lenny, all of which are examples.

The part that made Able a household name was the one she did in the 2006 horror film. All the Boys Love Mandy Lane, in which she portrayed a woman named Chloe. For those who are wondering, the protagonist of the horror film is a timid young woman who, despite being ostracized at her high school due to her introversion, draws a lot of attention to herself due to the fact that she is physically attractive.

It is significant to note that Scoot McNairy, who played the male lead, was the one who persuaded Gareth Edwards to cast Able, who played the female lead. Scoot McNairy was cast in the role because he persuaded Gareth Edwards to cast Able. After some time, these two eventually tied the knot and have been happily married since 2010.

Whitney Is The Godless Actress Who Plays Anna McNue

In the most recent season of the Netflix western Godless, Able portrayed a woman whose name was Anna McNue. The fact that one of the most prominent locations is a town named La Belle, which happens to be occupied by a significant number of women compared to males due to a collapse in the silver mine, adds an unusual dimension to those mentioned above western.

As a consequence, the town is in an unusual situation since the women who live there enjoy a greater degree of autonomy than the majority of women who lived during that period, despite the fact that this position is endangered by both bandits and mining firms.

After nine years of marriage, the actress made the announcement that she was no longer with the Halt and Catch Fire actor in November of 2019. She said on her Instagram account, “Earlier this year, Scoot and I decided to separate.” Even though we are no longer married, we are committed to working together to ensure that our children get a nurturing upbringing from both of us. The children’s biological parents are the former couple, who first became acquainted while working on the set of the film Monsters in 2010. 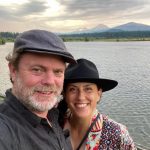