The man who played the legendary Rick Grimes in The Walking Dead is none other than Andrew Lincoln. He’s nearly fifty and is a deeply private man. Did you know that he was married, by the way? His wife’s name is Gael Anderson, and he has been married to her for over 16 years now. In this post, we’re going to be looking at the life of this woman and everything that there is to know about her.

Gael Anderson was born on the 22nd of December in the 1970s in England. Her father is the famous Ian Anderson. If you didn’t know who he was, then you have to go take a look at Jethro Tull. They’re a British rock band that was formed in 1967 in Blackpool, England. Ian plays the flute, guitar, bouzouki, mandolin, and harmonica. He’s also responsible for the vocals of the band. Gael’s mum is Shona Learoyd. She’s the second wife of Ian and has another kid, a son named James Duncan Anderson, with the rockstar. Gael was a girl who was born with a silver spoon. She was acclimatised to being in the limelight from a very young age which is why this woman had no qualms about marrying an actor.

Gael Anderson and Andrew Lincoln – How and when did they meet?

Gael has worked in showbiz, thanks to her interest in the industry from a young age. Her work is what got her to meet Andrew in the first place. This lady met her beau whilst she was a crew member on the sets of a British TV series named Teachers. It ran from 2001 to 2003, and that’s when Gael’s paths crossed with Andrew’s. After a brief exchange, they realised that they liked each other and began dating.

Andrew Lincoln’s marriage to Gael Anderson and their kids

Andrew knew that Gael was the one when he first laid eyes on this woman. However, he did wait for a while before proposing to her. The couple married on the 10th of June 2006. It has been a successful marriage so far. This couple welcomed their first child, a girl named Matilda, in 2007. Their second born was a boy named Arthur. He was added to their family in 2010. Both Gael and Andrew have been very protective of their family. They can’t be seen out in public much, and these two have always tried to make sure that their kids understand the importance of family values before they’re corrupted by external factors.

Who is Gael Anderson as a person?

This lady, from what we’ve learnt, is an incredibly hardworking and passionate woman. She has a passion for fine arts and can be seen living life to the fullest. Gael Anderson is also incredibly supportive of her husband. Although she loves her work, this woman put her family first and made sure that she was there for them at all times. If you ask Gael, she’d definitely tell you that she wouldn’t have it any other way. We wouldn’t want it any other way either, Gael. 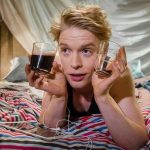