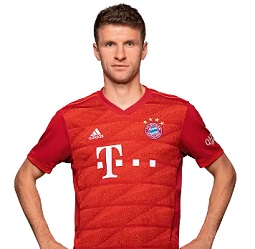 Wow! This means the average man in the UK needs to work for at least 36.0 years to earn the same as Ramdeuter earns in only 1 month.

The German forward is product of the Bayern Munich youth academy and has gone on to represent the first-team since 2008. The 30-year old has etched his name in Die Roten's history books and has a net worth of €125 million (£109 million). Slowly coming towards the end of his prime years, his market value is estimated to be in the region of €35 million (£30 million).

Müller Tattoo - Does he have one?