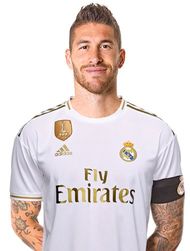 Wow! This means the average man in the UK needs to work for at least 49.3 years to earn the same as Cuqui earns in only 1 month.

The Spanish centre-back has had a career spanning 15 years at the biggest club in the world, Real Madrid. During that period he has conjured up a net worth in excess of €200 million (£177 million). Now at the twilight of his career he has a market value of €25 million (£22.2 million), but there are some things money just can't buy!

Ramos Tattoo - Does he have one?