Join WTFoot and discover everything you want to know about his current girlfriend or wife, his shocking salary and the amazing tattoos that are inked on his body. Find out what house the Italian central midfielder lives in or have a quick look at his cars! 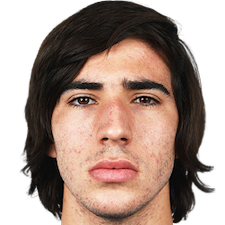 Wow! This means the average man in the UK needs to work for at least 3.6 years to earn the same as Il Nuovo Pirlo earns in only 1 month.

Heralded as Il Nuevo Pirlo in the Italian press the Lombardy born midfielder caught the eye at Brescia and moved to Serie A royalty AC Milan in the summer of 2020 taking his net worth to an estimated 4 Million Euro (3.5 Million Pound). The talented deep-lying playmaker is seen as the future of Italian football and his market value is estimated at well over 35 Million Euro (32 Million Pound).

Tonali Tattoo - Does he have one?