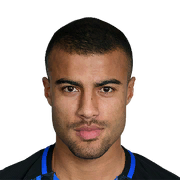 Wow! This means the average man in the UK needs to work for at least 9.4 years to earn the same as Rafa earns in only 1 month.

The Brazilian midfielder joined Barcelona's youth academy at the age of 13. He made his debut for the Blaugrana in 2011 and have gone on to represent the first-team sporadically ever since. He has a net worth of approximately €20 million (£18.3 million) and a market value in the region of €15 million (£13.7 million).

Alcântara Tattoo - Does he have one?