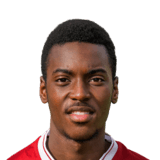 Meet this promising young midfielder that is currently playing for Sporting CB in his hometown Lisbon. This youngster is half Portuguese and also half Angolese, what an exciting combination. He has already made his debut for the first team of LFC in the FA cup. In the league he has not yet played any games but manager Jurgen Klopp is definitely following the development of this young lad. At least that is untill he was transfered to Portugal in the summer of 2019. He never really managed to make a lasting impression on star manager Jurgen Klopp and he did not make enough minutes, or so he decided. He wanted to play more and develop himself into a great player and he felt that at Liverpool he was not going to be able to do that. That is why he decided to go back to Portugal, back to where he came from. He joined his hometown team of Sporting CB in Lisbon in the summer of 2019. We at WTFoot hope he can develop himself there and one day he might be able to go back to the Premier League as a star, ready for action. For now lets have a look at his life!

Wow! This means the average man in the UK needs to work for at least 0.6 years to earn the same as CamaCama earns in only 1 month.

Rafa has not signed an 'adult style'-contract yet. He is still on his youth contract that he signed in 2016. As a result he has not yet made a whole lot of money but please dont feel sorry for this youngster, he is still worth about 400.000 Euro (360.000 Pound). His Market Value is rather easily determined. Sporting Portugal paid 15 Million Euro (13.5 Million Pound) for this talent, so his Market Value is somewhere around that figure.

Camacho Tattoo - Does he have one?