Join WTFoot and discover everything you want to know about his current girlfriend or wife, his shocking salary and the amazing tattoos that are inked on his body. Find out what house the English centre forward lives in or have a quick look at his cars! 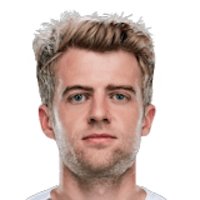 Wow! This means the average man in the UK needs to work for at least 4.9 years to earn the same as Pat earns in only 1 month.

After signing for English powerhouse Chelsea FC in 2012, the striker was sent out on loan to 6 different clubs across various divisions of English football during his contract with the Blues. In 2017 he moved to Middlesbrough on a permanent transfer, before joining Leeds United a year later. At 26 years of age the Grantham born forward has accumulated a net worth of 15 Million Euro (13.3 Million Pound); while boasting a modest market value in the region of 6.5 Million Euro (5.8 Million Pound).

Bamford Tattoo - Does he have one?