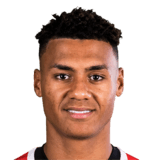 Wow! This means the average man in the UK needs to work for at least 8.8 years to earn the same as Ollie earns in only 1 month.

The 24 year English power forward made a name for himself with EFL Championship club Brentford and got his big move to the Premier League in 2020 with Aston Villa. His lucrative 5-year deal with The Villains saw his net worth rise to a substantial 20 Million Euro (18.2 Million Pound); Villa broke the club record fee for the hitman, paying in a reported 36.4 Million Euro (33 Million Pound) for his services, we expect his market value to be well north of that figure.

Watkins Tattoo - Does he have one?