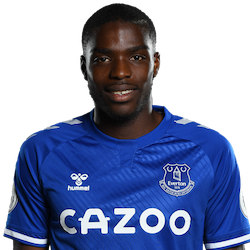 Wow! This means the average man in the UK needs to work for at least 2.0 years to earn the same as Kokou earns in only 1 month.

The prodigious French defender moved to Premier League club Everton from Ligue 1 club Olympique de Marseille in July 2020. He signed a three-year contract with the Merseyside Blues which took his net worth to an estimated 2.5 Million Euro (2.3 Million Pound). Everton reportedly paid around 3 Million Euro (2.7 Million Pound) for the youngsters services, and we reckon his market value is somewhere around that number.

Nkounkou Tattoo - Does he have one?