Join WTFoot and discover everything you want to know about his current girlfriend or wife, his shocking salary and the amazing tattoos that are inked on his body. Find out what house the Slovakian centre-back lives in or have a quick look at his cars! 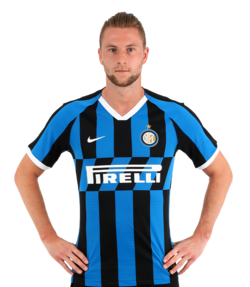 Wow! This means the average man in the UK needs to work for at least 13.05 years to earn the same as Scrigno earns in only 1 month.

The 24-year-old Slovak arrived at the big scene with Inter Milan signing him for a reported 34 Million Euros in 2017. His value has soared to a massive 60 Million Euros after it was speculated that Real Madrid had their eyes on him in 2019. Having had a humble start to his career before moving to Serie A, his net worth is estimated to be around 4 Million Euros.

Škriniar Tattoo - Does he have one?