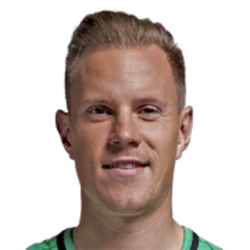 Wow! This means the average man in the UK needs to work for at least 10.3 years to earn the same as Mönchengladbach Wall earns in only 1 month.

The Berlin Wall came up through the youth ranks of hometown Borussia Mönchengladbach, before going on to represent their first-team between 2010-2014. He moved to Spain to sign for FC Barcelona in the summer of 2014. He has a net worth of €25 million (£22.6 million). The German goalie is one of the best player's in his position and has a market value of €90 million (£81 million), with a release clause of €180 million.

ter Stegen Tattoo - Does he have one?