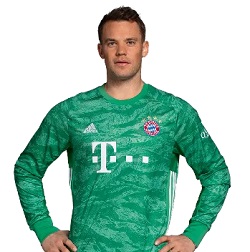 Wow! This means the average man in the UK needs to work for at least 36.2 years to earn the same as Manu earns in only 1 month.

The Bayern Munich and Germany goalkeeper has been one of the best player in his position for the last decade. His 10 year spell with FC Hollywood has seen his net worth hit an estimated €125 million (£109 million). The 33-year old is almost nearing the end of his career but still holds a market value of €18 million (£15.6 million).

Neuer Tattoo - Does he have one?