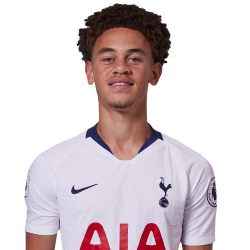 Wow! This means the average man in the UK needs to work for at least 1 years to earn the same as Amossíto earns in only 1 month.

This very talented English midfielder signed a new contract with Tottenham Hotspur in the summer of 2018. He signed a three-year-contract, just like other youngsters and big talents Timothy Eyoma and Oliver Skipp did the same week. All three players made a good impression during the pre-season tour in the USA and were rewarded with a new contract! His current market value is estimated at 4 Million Euro (3.6 Million Pound). He is still young and just started his career. His net worth is currently about 1 Million Euro (800.000 Pounds).

Amos Tattoo - Does he have one?