Join WTFoot and discover everything you want to know about his current girlfriend or wife, his shocking salary and the amazing tattoos that are inked on his body. Find out what house the Finnish Goalkeeper lives in or have a quick look at his cars! 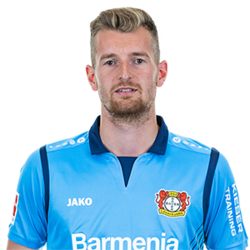 Hrádecký began his career in Finnish club Turun Palloseura. Although he did’nt find much sucees in his first club, the keeper became a permanent starter for IF Brondby and Esbjerg in the following years. After impressing with the Danish champions, Lukas was snapped up by veteran Bundesliga club Eintrach Frankfurth for a measly sum of €2.5million. In the 2017-18 season, the Finland international was voted Bundesliga Goalkeeper of the Season. In May 2018, current club Bayer Leverkusen announced his signing for the 2018–19 season on a free transfer. Hradecky earned several caps for Finland on different junior levels. He made his junior level national team debut when he was 16 in Athens in a match against Greece. He was a member of the Finland national under-20 football team was selected to Finland national under-21 football team for 2009 UEFA European Under-21 Championship but he had to withdraw due to a knee injury In January 2010, the shot-stopper was called to the Finland national football team . He finally made his first team debut in May 2010. During autumn of 2011 he established himself as a regular in the Finland national team and he also appeared in the UEFA European Championship qualifiers.

Wow! This means the average man in the UK needs to work for at least 6.3 years to earn the same as Hradecku earns in only 1 month.

Lukas has had a successful career that has spanned for well over a decade, helping his net worth touch the €4 million mark. Surprisingly, his market value is at a staggering low of €8 million, considering he is only 29 years of age at the time of publishing.

Hrádecký Tattoo - Does he have one?