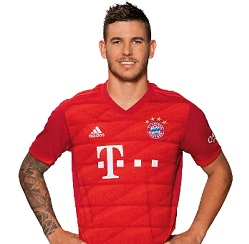 Wow! This means the average man in the UK needs to work for at least 31.2 years to earn the same as Luca earns in only 1 month.

The 23-year old French centre-back is a product of Atlético Madrid's youth academy and is one of the finest prospects in Europe. The youngster's multi-million year deal with Bayern Munich has seen his net worth soar to €68 million (£58.7 million). His potential is reflected in his market value which stands in excess of €70 million (£60.4 million).

Hernandez Tattoo - Does he have one?