Join WTFoot and discover everything you want to know about his current girlfriend or wife, his shocking salary and the amazing tattoos that are inked on his body. Find out what house the German defensive midfielder lives in or have a quick look at his cars! 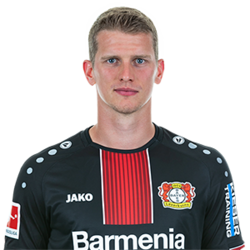 The elder one of the Bender brothers, Lars has established himself as one of the Bundesliga’s prominent midfielder in this decade. A versatile player, he is also comfortable playing as a right back. Along with his brother Sven, the youngster joined 1860 Munich’s youth team in 2002. He was fast-tracked into the senior team after a shade over four years in 2006. After three wonderful years at the club, he made a move to current team Bayer Leverkusen, where he made major strides as a professional player and made a major impact in his side’s rise to become one of the country’s premier clubs. The midfielder has represented Germany across every major youth level. As a U-19 player, he was part of the highly talented Germany team with won the 2008 UEFA U-19 European Championships. The brothers were named as joint players of the tournament. Bender was appointed as the club captain by then manager Roger Schmidt post Simon Rolfes’ retirement. Bender was chosen as part of Germany's 23-man squad for Euro 2012. He was named in Germany's provisional 30-man squad for the 2014 FIFA World Cup, but withdrew on 23 May following a thigh injury in training. He scored an 80th-minute winner in the final group game against Lars was joined by his brother Sven in 2017, after the latter signed a four-year deal with the former’s club.

Wow! This means the average man in the UK needs to work for at least 5.3 years to earn the same as La Lars earns in only 1 month.

Lars had a career high value of €22 million in February 2014, when he was at the peak of his playing prowess. Currently, the midfielder is said to have a net worth of €6 million after 11 years of solid professional service to his craft.

Bender Tattoo - Does he have one?