Join WTFoot and discover everything you want to know about his current girlfriend or wife, his shocking salary and the amazing tattoos that are inked on his body. Find out what house the Dutch/Nigerian striker lives in or have a quick look at his cars! 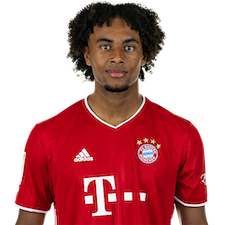 Wow! This means the average man in the UK needs to work for at least 1.3 years to earn the same as Big Jo earns in only 1 month.

Big Jo left his home country to join the youth system of FC Bayern Munich to complete his development. He was rewarded with a 3 year deal in 2020 which took his net worth to an estimated 2 Million Euro (1.8 Million Pound). The Bavarian giants have a diamond in the rough in their hands and it'll take more than his reported market value of 9 Million Euro (8.2 Million Pound) to get him off their hands.

Zirkzee Tattoo - Does he have one?