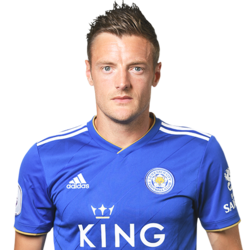 Born in Sheffield, England, he faced rejection early in his footballing career when he was released from Sheffield Wednesday's youth academy at 16. He moved on to Stocksbridge Park Steels' youth academy, coming up through the ranks to join the reserves and eventually the first team, making his debut in 2007 earning £30 a week. In June 2010 the striker signed for Halifax Town, a club from the fifth tier of English football, he was voted their Player of the Season for scoring 25 goals in 37 appearances helping the club win the Northern Premier League title. In 2011/12 the striker signed for Conference Premier club Fleetwood Town, his 31 goals from 36 games saw him finish as top scorer of the division and helped his club secure the Conference Premier title. His performances attracted the attention of Championship club Leicester City who signed him ahead of the 2012/13 season for £1 million, a non league record. His debut season was one of disappointment as the striker's loss of form saw him return 4 goals in 26 league appearances, prompting a decision to leave, however, manager Nigel Pearson and assistant manager Craig Ferguson convinced the striker to change his mind. The Englishman would turn his fortunes around the following season, his 16 goals from 37 games propelled Leicester to the top of the Championship enabling the club to win promotion to the Premier League, with the striker earning Leicester City's Player's Player of the Season for his efforts. The 2014/15 season would be all about adjusting and survival for both the club and the player, the striker would only score 5 in 34 appearances as the club avoided relegation by finishing 14th in the table after the an incredible run of 6 victories in their last 8 games. What happened next, no one could've predicted, the 2015/16 saw the striker score 24 goals in 36 appearances, by September he had eclipsed his previous seasons tally with 7 goals, by November he had broken Ruud Van Nistelrooy's long standing record of scoring in 11 consecutive Premier League matches by scoring against Manchester United, the result put Leicester City top of the Premier League table. The awards kept piling on: BBC Goal of the Season for his volley against Liverpool in February, Premier League Player of the Month for October and November, PFA Team of the Year, FWA Footballer of the Year, Barclays Premier League Player of the Season and last but most important of all a Premier League winners medal as his club would be crowned Premier League champions. The Englishman would pledge his future to club and continue his fine form with 33 goals in the following couple of seasons. He signed a new contract before the start of the 2018/19 seasons, keeping him at the club until 2022.

Wow! This means the average man in the UK needs to work for at least 19.9 years to earn the same as Vards earns in only 1 month.

Playing non league football for the majority of his early career, the rise of the Englishman is a story of miracles as he came from football obscurity to become Premier League champion with Leicester City. Major contract deals with The Foxes has put his net worth at an estimated €55.2 million (£47 million). Now at 32 years of age the striker still retains a market value close to €20 million (£17 million).

Vardy Tattoo - Does he have one?