Join WTFoot and discover everything you want to know about his current girlfriend or wife, his shocking salary and the amazing tattoos that are inked on his body. Find out what house the Senegalese right winger lives in or have a quick look at his cars! 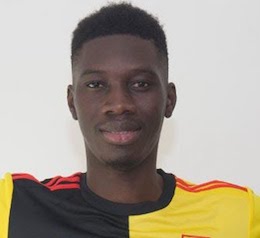 Born in Saint-Louis Senegal he began his career with hometown club Génération Foot in 2009 as an 11 year-old, before graduating in 2016, upon which he was scouted and signed by French club FC Metz. On 13 August 2016, the man from Senegal made his Ligue 1 debut, coming on as a second-half substitute in a 5 goal thriller against LOSC Lille that ended 3-2 in favour of Metz. He made 31 league appearances for Les Grenates in his debut season, chipping in with 5 goals and assist apiece, as the club finished in the bottom-half of the table. His performances caught the attention of fellow Ligue 1 outfit Stade Rennais, and they secured the winger’s services for a fee of €20 million ahead of the 2017/18 season. The Senegalese winger found his best form playing for Rennes, totalling 18 goals and 16 assists in 77 appearances. On 27 April 2019, Rennes edged out French powerhouse PSG 6-5 in a penalty shootout to lift the Coupe de France; the man from Senegal played his part by slotting his team’s sixth penalty, before Christopher Nkunku missed for PSG to give Rennes the win. On 8 August 2019, he moved to England to sign for Premier League club Watford in a deal worth £30 million, making his debut later in the month as the Hornets fell to a 3-1 defeat to West Ham United.

Wow! This means the average man in the UK needs to work for at least 3.2 years to earn the same as Smiley earns in only 1 month.

The Senegalese man played for a couple of French clubs in FC Metz and Stade Rennais FC, establishing himself as a winger to be feared. In the summer of 2019 he signed for Premier League club Watford. He has a net worth approximated at €6 million (£5.4 million), and a market value in the region of €30 million (£26.9 million).

Sarr Tattoo - Does he have one?