Join WTFoot and discover everything you want to know about his current girlfriend or wife, his shocking salary and the amazing tattoos that are inked on his body. Find out what house the Nigerian left winger lives in or have a quick look at his cars! 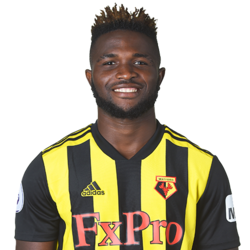 Born in Benin City, Nigeria, he began his footballing prospects with the youth academy of local side BJ Foundation. In November 2013, he agreed to join Italian Serie A side Udinese on a five-year contract, but the deal fell through due to issues with obtaining a work permit, and instead decided to join Spanish side Granada CF, being assigned to the reserves in Segunda División B. After impressing with Granada B, having scored 9 goals in 20 appearances, he would be given an opportunity to prove himself for the first-team. On 31 August 2014, the Nigerian forward made his debut in a 1-1 draw against Elche CF, thus becoming the youngest ever player to appear in a La Liga fixture, aged 18 years and 7 months. The forward would go on to score his first professional goal in a 1-1 draw against Valencia on 7 December 2014. During his time with the Nazaríes the Nigerian forward scored and assisted 7 goals a piece in 56 appearances. On 1 July 2016, Premier League club Watford paid a club record transfer fee of £12.5 million to secure the services of the Nigerian speed demon on a five-year deal. The Nigerian never hit the ground running with The Hornets, scoring just once in 21 appearances during his debut season, and was consequently loaned out to Spanish side Malaga for the 2017/18 season to regain his form and confidence. Upon his return he showed glimpses of living up to his potential, scoring 4 goals in 27 appearances, and collecting an FA Cup runner-up medal as Watford fell to Manchester City in the finals.

Wow! This means the average man in the UK needs to work for at least 4.2 years to earn the same as Isa earns in only 1 month.

The Nigerian forward came up through the youth ranks of local side BJ Foundation in Benin City before moving to Spain in 2014 to play for Granada. In 2016 he signed a five-year deal with English club Watford, bringing his net worth up to €9 million (£8 million). The forward has a market value in the region of €5 million (£4.3 million).

Success Tattoo - Does he have one?