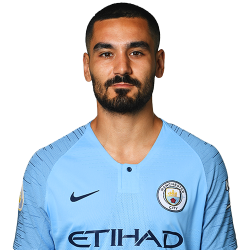 Wow! This means the average man in the UK needs to work for at least 17 years to earn the same as None earns in only 1 month.

The German has been playing pro football for a very long time now. It has been over 10 years since he made his debut at VfL Bochum. It is pretty obvious that he has made a huge amount of cash during his career. Signing with Man. City certainly didn't hurt that as the English team are well known for spending huge sums of money on both salaries and transfer fees. His net worth is estimated to be around 20 Million Euro (17.5 Million Pound). His Market Value has been on the decline ever since he joined Man City. The midfielder is nearing the end of his 'prime' and as such we think his market value is around 25 Million Euro (22 Million Pound).

Gundogan Tattoo - Does he have one?