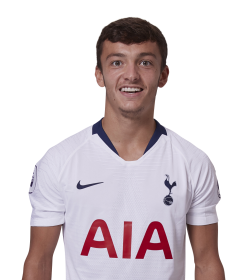 Hello and welcome to all WTFoot fans from over the world. In this wiki we are going to tell you everything there is to know about Marshmallow! This holding midfielder is currently playing for Tottenham Hotspur in the Brittish Premier League. As we said he can play as a holding (defensive) midfielder but he can just as easily move back and play as a centre back, talk about versatility! He was born in November of 1998 and he started his career at the Youth-Academy of Tottenham Hotspur. He played a lot of games for several youth-teams, including the U17 and U18. He was even the skipper (captain) for some of those teams for several periods in the season. Impressive stuff from Marshmallow. He later on also played a bunch of games for the U23 side. He could just be the perfect backup for players such as Eric Dier and Luke Amos. We think it is only a matter of time before this talented youngster will have his impact on the first team of Tottenham Hotspur. For now, let's have a look at his life.

Wow! This means the average man in the UK needs to work for at least 0.6 years to earn the same as Marshmallow earns in only 1 month.

His net worth is still relatively low, given the fact that he has only just started playing professional football for the seniors. Currently his net worth is roughly 250.000 Euro (220.000 Pound). His Market Value is on the rise, obviously. It is currently about 2.5 Million Euro (2.3 Million Pound).

Marsh Tattoo - Does he have one?