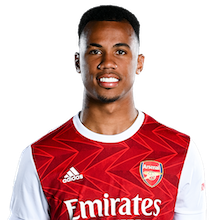 Wow! This means the average man in the UK needs to work for at least 11.4 years to earn the same as Gabi earns in only 1 month.

The Brazilian first moved to Europe in 2017 to play for French club Lille, and his performances has led to Arsenal signing him on a long term deal. The move to London has seen his net worth rise to an estimated 22.5 Million Euro (20.5 Million Pound). The Gunners paid a reported fee of 29.5 Million Euro (27 Million Pound) for the Brazilian's services, his displays will determine whether his market value rises or falls from that figure.

Magalhães Tattoo - Does he have one?